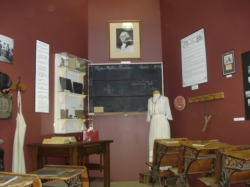 Our 24 hourse, four chariot Armitage Herschell/Herschell-Spillman portable track carousel opened at "The Oaks" Amusement Park in Portland, Oregon, in May 1905. This very rare piece was an early style manufactured in North Tonawanda, New York sometime between 1890 and 1907. This carousel is unique as it is a two-row portable track machine, meaning there is no overhead mechanism. The horses are rocked in a plunging motion by an arm that connects from beneath the metal-legged sawhorse arrangement upon which horses and chariots sit. The carousel is driven by tires on a track beneath the deck and the machine is run by a belt from an external engine.
On May 5, 1929 the Alder Creek Pioneer Association formed a committee to purchase a merry-go-round. Members were: Soren Matsen, Sam Ganders, and N.B. Matsen. This committee was instructed to use their judgment as to kind and price of merry-go-round.
The Alder Creek Pioneer Association records show that ledger disbursements for a merry-go-round were on June 4, 1929. Total cost of this carousel, band organ and steam engine was $500. Four men, Charles Jensen, Sam Ganders and Soren Matsen, went to Portland and spent four days dismantling and loading the carousel onto a railroad boxcar. It arrived in Roosevelt where they met the train, loaded the carousel onto their trucks and brought it to the Pioneer Picnic grounds at Cleveland. It was reassembled under the direction of George Miller. The only newspapeer in eastern Klickitat County, Bickleton News, dated Friday, June 14, 1929 reads "Alder Creek Pioneer Association Has Purchased Its Own Merry-Go-Round Which Is Bigger and Better Than Any Ever Set Up in Klickitat County." It opperated that first year 1929 at the 19th Pioneer Picnic and Rodeo and brought in receipts of $286.98.
After many years of use and abuse in 1968 members of the Bickleton community began the first restoration work on the carousel. In the 1980's extensive restoration work began in earnest on four horses. The 1990's brought many talented carbers, painters, to finish restoring the next 20 horses. As of 2003 all 24 horses have been restored at a cost of $28,196. In 2004 restoration work has begun on the four chariots. The cost of the first chariot restoration was $2486. Originally the Carousel was operated by a steam engine. It was a five horse power engine that operated at 120 pounds of steam pressure with a water temperature of 356F. The boiler held 90 gallons of water and used five ten gallons per hour. With its 176 foot long steel cable, it took one and a half to two hours to develop enough steam pressure to give rides. Through the years the steam engine was abandoned for the use of a belt driven tractor, then much later a belt driven electric motor.
Early in 2004 the original steam engine was found and purchased on the internet for $3240 from Windward Center in Wahkiacus, Wa.
The Band Organ (music box) is a Wurlitzer Model 3534 and is original to our carousel. It was imported from Germany in the late 1890's, is a 31 key hand cranked organ and is beyond being restored.
According to the Historian at the Herschell Factory Museum in New York our Carousel is one of fewer than ten operational left in the United States.
Restoration work on our beloved Armitage Herschell/Herschell-Spillman Carousel has been funded by carousel pin sales eache year at the Pioneer Picnic, memorials, donations and grants from the National Carousel Association, the American Carousel Society, and Klickitat County Economic Development.